Published on November 10, 2014,
It’s TRUE: There was a fire directly above our store, TREASURE CHEST COLLECTIBLES, at 1026 7th Avenue, Marion.  The Marion Maidrite had some smoke smell but no damage.  Our store had some very minor damage and in our back storage room.  Fact is, the Maid-rite and our store share a common rear entrance.  The Maidrite then has a door to their business.  We have a door to our backroom and another door to the store from inside the storage portion of our store.
The cause of the FIRE remains under investigation.  But the fire cause…we heard via another biz electrical…fire chief on scene…not deb but chief in charge on scene, when working in back of my store about an hour plus in….reported at that time they were continuing to investigate the cause so I’m not sure of the cause only that a door was on fire and embers mentioned. In fact when we asked again later…we were advised they weren’t sure yet.
We Treasure Chest share a back entrance with the Maidrite, a small room…then from there they have a door to their business and we have one to our business back room and in floor basement entrance and another door to our business to block it off from public if u will.  The firemen physically came into our business door to store room portion of the store.  The fire chief on the situation advised us that the door that started the fire was directly above a troubled spot we knew of prior to the fire, in our back room north wall.  The fireman shared information with us about the concerns due to the buildings age re…embers and concern fell to voids and with all of them in this old structure..he wasn’t anxious to just leave.  His department exceeded our expectations in their genuine care shown towards ensuring the buildings were safe and as little belongings damaged as possible.
Truth is, the Maidrite smelled the fire first..and reported to my husband they called it in to 911…our landlord reported one of the tenants upstairs called so I’m unsure of facts re whom called.  It was our opinion the Maidrite probably smelled it first because my husband was working at the front of the store…treasure chest..while Maidrite serves customers closer to their back door.and they have one door between them and business and we have two and both doors were shut….these are the doors after entering the shared back entrance..When my husband smelled fire  or smoke and went to check, he was met by a fireman on the step at back at same time. So that clarified the real ness of the smell.  Also the Maidrite had stronger smoke smell even when we left about 7 pm…or after….didn’t check my watch.
I don’t think the maid rite lost anything..when we were talking with them they were telling us what they saw the firemen hauling out of our store……they defined trash…..we clarified they were describing our foam, peanuts….and truth is, we lost all our shipping and packing supplies from the water damage.  Minimal damage although we had just bought a couple of hundred dollars worth of new shipping supplies so that’s a bummer yet insignificant to what could have occurred.  The fire department did knock dry wall to an already water damaged and needing repaired back room ceiling inside our stores back north wall along with water saturating it.  That’s the damage.  And I know that Terri and Nicole, Maidrite owners, were very happy as they were most concerned about their family history and photographs displayed throughout their store.  Perhaps photographs can become displayed copies to ensure their permanent history?  Those photos would be a loss to the community and the atmosphere created that only can be found at this one and only Maidrite of its kind…we know it as the Marion maidrite.
My husband Bryan Dolezal, was there the whole time….I came from picking one of children up from an event….I left and took our kids home as I recognized a return to see damage and get s report , and came back.  The Maidrite owners, their mom, a couple of their friends, my husband, and I remained until the fire department gave the all clear.  Our landlord came and went, per my understanding.  We will clean up the minimal damage to our back room today, as we were slated to be open Sunday’s again today thru At least the end of May….busier season of our business type.
Our landlord has reported to us on numerous occasions that he will be fixing the entire back area of the building housing the Maid-Rite, Treasure Chest, and Schmitty’s and the apartments above stated, including the rear entrances of the Maid rite and our Store soon anyway.  While there is an art grant in Marion which involves fixing up the alleyways in the backside of our stores, our landlord reports he will be fixing the buildings including the shared rear entrance, as the business owner not building owner, we are unsure if this fire damage speeds up the building owners’ timeline of repairs and structural issues needing addressed on these over 150 year old buildings OR NOT.

As we approach winter, we are expanding our hours for your convenience. We will now be open the following hours:

Tell your friends, and come join us for these great expanded hours.  See you in the Chest!

When did you last come in?  If it’s been more than a week, then you will not even believe it today!  The pedal tractor from the 1960′s valued over $700 about 75% off that price and cheaper than the plastic you can buy today at a local farm store (for example).  Co-owner’s birthday is October 30, so it is time to sell TILLIE, whom was last year’s present to herself, and now ready to sell and let someone else enjoy her (size of 4 foot child)….we have about 10 new sealed in the box Board games new the past week, A LOT OF NEW TO THE STORE M & M items and more coming in daily.  Most impressive is a one of kind, signed, rare GUND black bear from 1993; you have NOT seen a bear until you have seen this one because quality is the first impression and reality that not all bears are the same (he looks like ‘money’).  BEAUTIFUL collector GUND BEAR; rare find.  We have a lot of new things in; Ruthie has been pricing for weeks now and in preparation of their exciting grand re-opening, about 500 new to the store items are hitting the floor this week, so do not miss out.  COME IN NOW.  You will be glad you did.  Thanks.

Cobalt Blue dishes and accessories. In stock now. Set of 8 of the dinner plates, bread plates, cups & saucers, ice cream bowls. Set of 4 of the ‘smooth’ plates and bowls. Stop in for these beautiful pieces today!!! 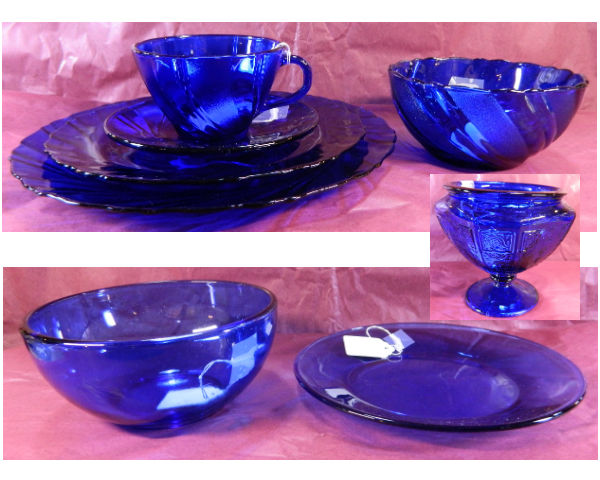 15 late silver age/early modern age comics are just in to the store. Mickey Mouse, Archie (and the gang), The Road Runner, Little Lulu, and even a great find: Underdog!!!!! Stop in and check out these great vintage (or near vintage) comics…all priced by condition and ready to join your collection!!!!! See you in “The Chest”! 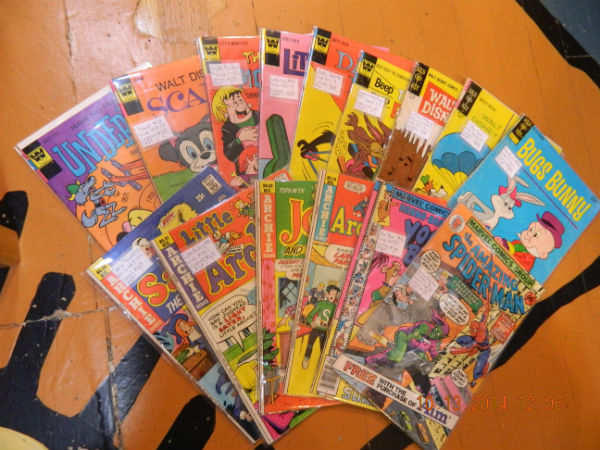 We are pleased to share a new (to us) collection of Hummel figurines.  This adds 20 figures and 1 plate to our current stock of 16 figures and several plates…and all priced at fair market value!!!  Stop in and check out these great figures!!! 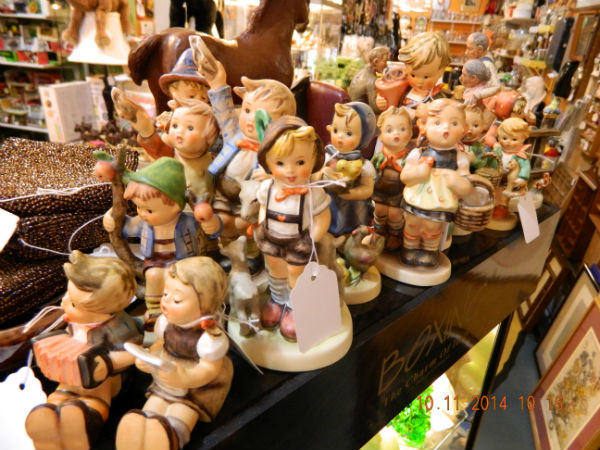 SOLD SOLD SOLDAll you pedal tractor collectors out there…this is an outstanding piece.  All original condition, some scuffs from play/use, great condition!!!  Must see to appreciate!!! SOLD SOLD SOLD 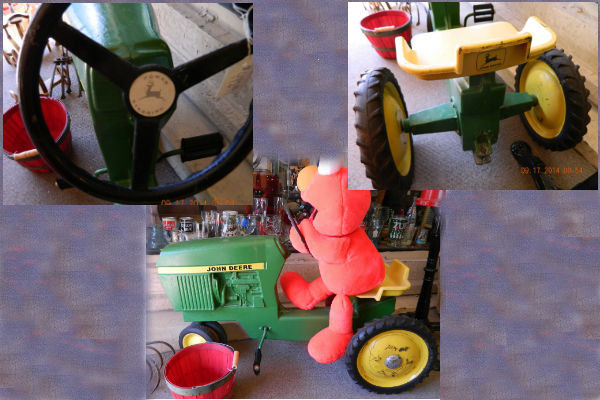 This Saturday, September 6, 2014, is the annual Swampfox Festival in the great Marion, Iowa.  Events start early in and around Marion City Park, and TCC will be there for all the great festivities!!! We plan on opening early (around 7:30 am), and staying open late (around 5….or later if you great customers keep coming in).  We are participating in the sidewalk sales from 10 – 2, and will have a great promotional handout during that time!!!  You don’t want to miss that!  Come on down to Marion this Saturday, enjoy the Swampfox festival, and stop in and check out Treasure Chest Collectibles featuring Toy Time!

This is truly a fantastic set: a Monarch stereoscope with 59 Keystone View Company picture cards to go with it. This shows a 3D image like a ViewMaster, but dates back to the early 1900s (1904 is often a date thrown around with similar items). This would be a great decorating piece and would be an outstanding conversation piece! Fantastic condition! 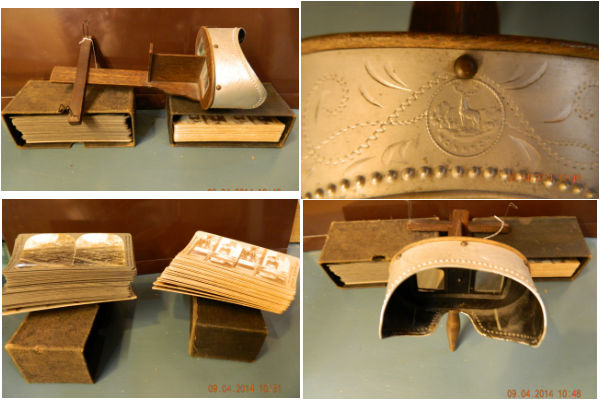 We have a HUGE inventory of miniature items! Animals, objects, animated favorites…plus the shelves and printer drawers to display them in! Check out our great selection of miniature collectibles to fill in your existing collection, or to start your very own. They may be small, but have such a HUGE impact! 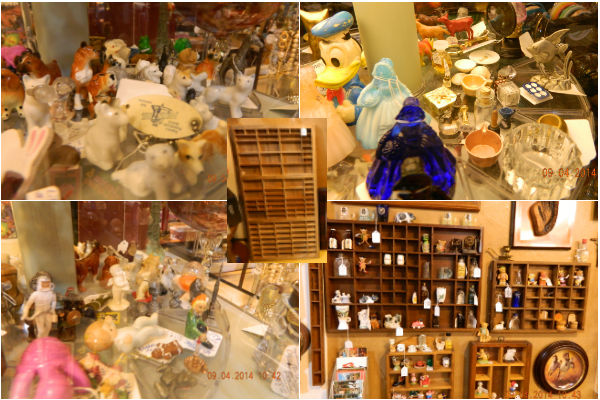 Check us out on ebay

Follow us on Facebook and Instragram @treasurechestcollectibles to be the first to hear about sales, events, news, and new items available in store.